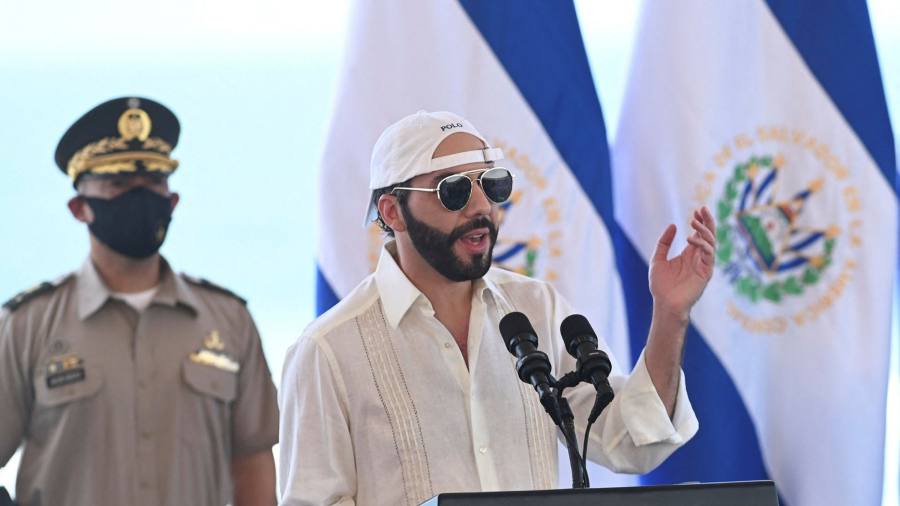 El Salvador said on Tuesday it plans to buy back $1.6bn of its sovereign bonds in an attempt to allay fears of default in the Central American country that adopted bitcoin as legal tender last year.

President Nayib Bukele said on Twitter he was sending two bills to the national assembly “to ensure that we have the available funds to make a transparent, public and voluntary purchase offer to all the holders of Salvadoran sovereign debt bonds”.

He added the bonds would be bought back at market prices and the process would begin in about six weeks.

“El Salvador has the liquidity not only to pay all of its commitments when they are due, but also purchase all of its own debt (till 2025) in advance,” Bukele said.

Finance minister Alejandro Zelaya told a press conference the county would pay for the buyback using special drawing rights from the IMF, along with a $200mn loan from the Central American Bank for Economic Integration.

“We are ensuring the availability of funds to offer our bondholders an early purchase option for the debt, which will be public and will respect market regulations,” Zelaya said. “It is a sign of the liquidity of our finances.”

El Salvador’s bonds have traded at deep discounts since its adoption of bitcoin as legal tender, alongside the US dollar, in September 2021. The Bukele administration proposed selling a bitcoin bond, but the idea has faltered as cryptocurrency prices have cratered.

“It’s the best option the government had on the menu to honour the expiration of these bonds. The success of this initiative will depend on how the market reacts,” said Carlos Acevedo, a former Salvadoran central bank governor.

The country’s sovereign debt leapt in value on the news, with bonds maturing in 2023 rising nearly 10 cents on the dollar to change hands at 86 cents. Debt due in 2025 advanced to its highest level since April, climbing just under 14 cents to trade at 49.6 cents on the dollar. The pop nonetheless left the 2025 notes deep in distressed territory, underscoring the high risk investors believed the debt has.

“The government is betting the bonds’ prices will remain low, but surely with the measures they’ve announced the prices are going to increase,” said Ricardo Castañeda, senior economist and co-ordinator for El Salvador at Icefi, a think-tank. “In reality, they’re going to end up paying the total amount, but perhaps in advance.”

Moody’s downgraded El Salvador’s debt rating deeper into junk territory in May and later estimated the country’s unrealised bitcoin losses at $57mn. The price of bitcoin, along with other big cryptocurrencies, has fallen since the start of the year as a crisis ripples through the digital assets sector.

“Bitcoin-related initiatives, including its adoption as legal tender, complicated an already strained relationship with the IMF. This has led the government to rely on regional multilateral institutions,” Moody’s said.

Executive directors at the IMF, from which the country had been seeking a $1bn loan, have also expressed concerns in the past about El Salvador’s adoption of bitcoin.