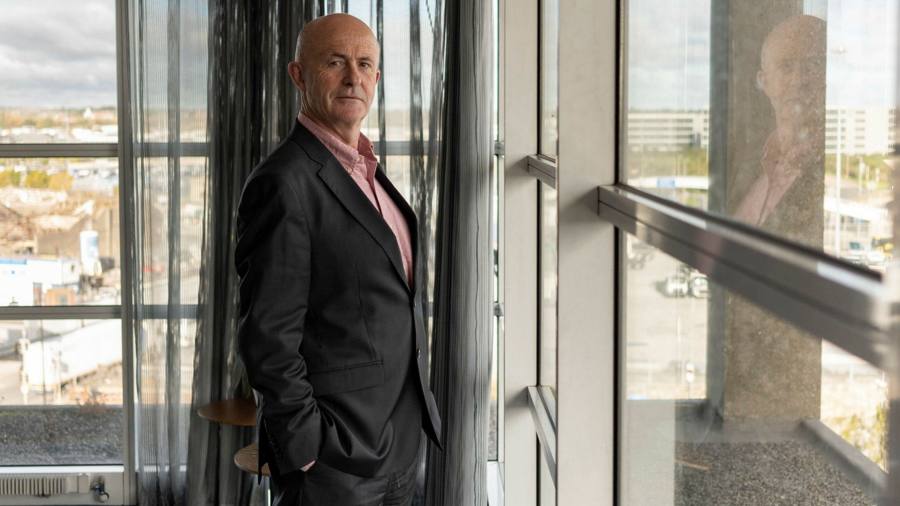 From a vantage point above Dublin port, Eamonn O’Reilly can see how Brexit is changing the terms of Ireland’s trade.

Rising rapidly in importance at Dublin is what O’Reilly, the port’s chief executive, says is “Lo-Lo traffic” — unaccompanied containers that are lifted on to ships and then lifted off at their port of destination.

Lo-Lo’s counterpart, “Ro-Ro” — where containers are sent on the back of lorries and roll on to and off ships — is on the decline. Ro-Ro freight was mainly bound for Great Britain, Ireland’s traditional trading partner, and the shift is a sign of how Ireland’s biggest port — and the country’s economy — is pivoting to focus on continental Europe.

“When you’re going longer distances to continental Europe, [Lo-Lo] is more viable because it’s cheaper,” O’Reilly said in an interview overlooking a yard that will soon be expanded to take account of changing trade patterns. A new phase of the port’s overall €1.6bn 30-year expansion master plan, announced in November, includes a plan for Ireland’s largest Lo-Lo container terminal.

Prior to Brexit Dublin’s main importance for trade with continental Europe was its position as the gateway to a “land bridge” via the UK. Trucks carrying freight would cross the Irish Sea and traverse Britain before moving on to France or other parts of the EU.

Now post-Brexit checks are pushing many hauliers to divert exports from Dublin directly to the EU, bypassing the UK entirely. Since the UK left the EU at the start of this year, Lo-Lo volumes from Dublin have risen 14 per cent compared with the same period last year, according to port data.

Dublin Port’s trade is now split 50-50 between the UK and EU, whereas prior to Brexit, trade with British ports accounted for roughly two-thirds of volumes, O’Reilly said.

Ireland is betting on such trade growing. Last month, it opened a new goods terminal in Dunkirk as a gateway to the continent, to be served from the southern port of Rosslare, the main rival to Dublin.

The Irish Maritime Development Office notes that Irish importers and exporters now have access to 13 different direct EU Ro-Ro services, up from just six in 2019, before Covid-19 disruptions.

In a new report, it found Ireland-EU traffic was 52 per higher in the first nine months of this year than in the whole of 2019.

The other main shift at Dublin concerns Northern Ireland. Since 2006, Dublin has handled most goods going into Britain because routes from Dublin are the shortest. By last year, Dublin handled a quarter more Ro-Ro volumes than all of Northern Ireland’s three main ports — Belfast, Larne and Warrenpoint — combined.

But now — because of the customs red tape introduced when Brexit put a customs border down the Irish Sea — trade is increasingly going to Britain via Northern Irish ports. The volume of Ro-Ro cargoes in Dublin has fallen by a quarter in the first nine months of this year, O’Reilly said.

“I think it’s permanent . . . It’s turning back the clock,” he said. “History suggests to me that [this trade] won’t come back.”

Joe O’Neill, chief executive of Belfast Harbour, told the FT he had seen at least a “partial reversal” of previous trends with Ro-Ro volumes up 5 to 7 per cent in the first nine months of this year, compared with the same period last year.

“We do suspect that the growth we are enjoying at the minute in Ro-Ro is in part from the contribution of some traffic that is not going out of Dublin port,” he said.

While Dublin Port saw a 3.3 per cent drop in overall tonnage handled in the first nine months compared with the same period last year, the number of containers and trailers fell just 0.5 per cent, O’Reilly said.

“We think what’s happening now is that, on average, there are less goods in each container,” he said. Consolidating loads into one container could require multiple customs checks under post-Brexit rules.

“It’s an inefficiency introduced into the supply chains but it’s bad for the carbon impact,” O’Reilly said. More containers also puts pressure on the port’s already squeezed capacity, he added.