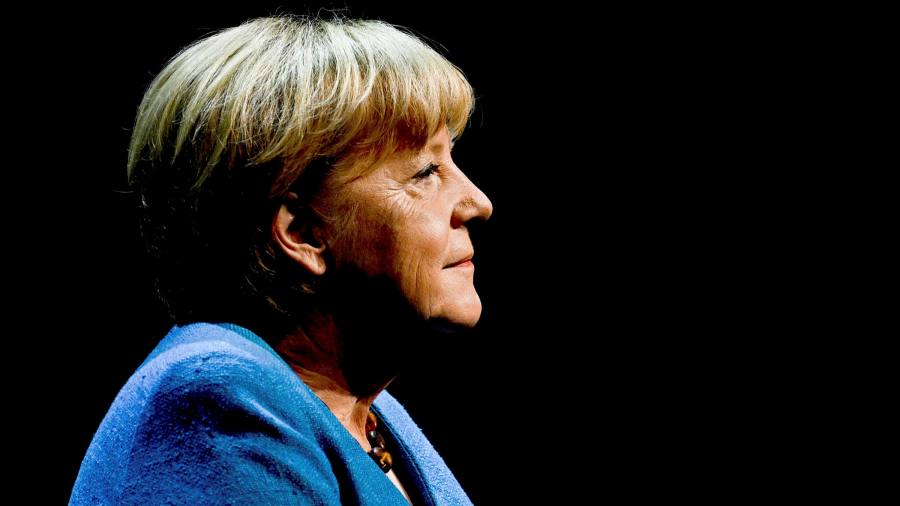 Angela Merkel said she had “nothing to apologise for” over her policy towards Moscow as Germany’s former chancellor denied that she had “appeased” Vladimir Putin in her efforts over the years to ease tensions between Russia and Ukraine.

Merkel was giving her first interview since stepping down as chancellor in December last year. It was also the first time she has been quizzed publicly over her policies towards Putin, which have come under mounting scrutiny since Russia launched its invasion of Ukraine on February 24.

“Diplomacy isn’t wrong just because it doesn’t succeed,” she said. “So I don’t see why I should say that was wrong, and I won’t apologise for it.”

She said of the war: “Looking back, I’m glad that I can’t accuse myself of trying too little to prevent such an event from happening.”

The comments triggered a derisory response from Mykhailo Podolyak, adviser to Ukrainian president Volodymyr Zelenskyy. “If Merkel always knew that Russia was planning a war, and that Putin’s goal was to destroy the EU, then why build Nord Stream 2?” he said referring to the controversial pipeline bringing Russian gas directly to Germany, which Merkel’s government had backed.

“The ex-chancellor said she was not naive,” Podolyak added. “So why get Europe addicted to Russian oil and gas?”

Merkel was long seen as one of Germany’s greatest postwar leaders. But her reputation has taken a battering since the outbreak of Russia’s war, with many in Kyiv and Berlin accusing her of cosying up to Putin and prioritising economic ties with Moscow over support for Ukraine.

Her interview in front of a packed audience in the Berliner Ensemble theatre with Alexander Osang, a reporter with news magazine Der Spiegel, showed that she had been stung by the criticism.

The normally cool Merkel, who admitted to being “depressed” by the Ukraine conflict, was combative and emotional, keen to justify herself and rebut what she clearly felt were unfair accusations about her conduct in office.

Much of the criticism has focused on her policy of “Wandel durch Handel” — or “change through trade” — which was based on the idea that deepening economic ties between Russia and the west would encourage political change in Moscow and a shift to liberalism and western values.

Merkel said she had never believed in the “illusion” that Putin could be changed through trade. She said her view was that if there could not be a close political relationship between Europe and Russia, “then at least it would make sense to have a trade relationship, because you can’t completely ignore each other”.

She also defended her insistence on always keeping open the channels of communication with Putin. “Russia is the second-largest nuclear power in the world,” she said. “I can’t pretend that it just doesn’t exist.”

“The interests of the country I governed meant finding a modus vivendi with Russia, in which we’re not at war but can try to somehow coexist, despite all our differences,” she said, to warm applause.

Many of the attacks on Merkel have focused on her diplomacy to end the conflict in the Donbas, the eastern border region of Ukraine where Russia-backed separatists staged an uprising in 2014.

Germany and France brokered the Minsk agreements that froze the conflict. But the separatists remained in control of the territory they occupied in 2014 and the hostilities did not stop.

Kyiv signed the Minsk 2 agreement in 2015 after Russian forces intervened in the conflict in support of the separatists, imposing heavy losses in the town of Debaltseve. Merkel said the agreement came about as “6,000 Ukrainian troops were at risk of being encircled in Debaltseve” and the deal had “introduced a measure of calm”. The shaky peace it established also gave Ukraine “seven years to develop into what it is now”.

She added that she did not “know what would have happened if Putin had just kept going in 2014 and no one had bothered about that”.

Merkel has also been sharply criticised for her reluctance to offer Ukraine a path towards membership of Nato at the crucial Bucharest summit of the western military alliance in 2008. Merkel said Ukraine at the time was a “deeply divided” country with a “shaky” democracy that was “ruled by oligarchs”.

She said she had not wanted to provoke Putin, adding that he would have seen Ukraine’s membership in Nato as a “declaration of war”.

“[He] wouldn’t have just let it happen.”

Merkel also defended herself against the accusation that she had not reacted strongly enough to Russia’s annexation of Crimea in 2014.

She cited the EU sanctions imposed on Moscow, which had been repeatedly rolled over, Russia’s exclusion from the G8 group of major industrial nations, Nato’s decision that each member state should spend 2 per cent of gross domestic product on defence, and the sharp increase in the German defence budget from €32bn in 2014 to €50bn now.

Video: Volodymyr Zelenskyy: ‘No one is humiliating Ukraine. They are killing us’