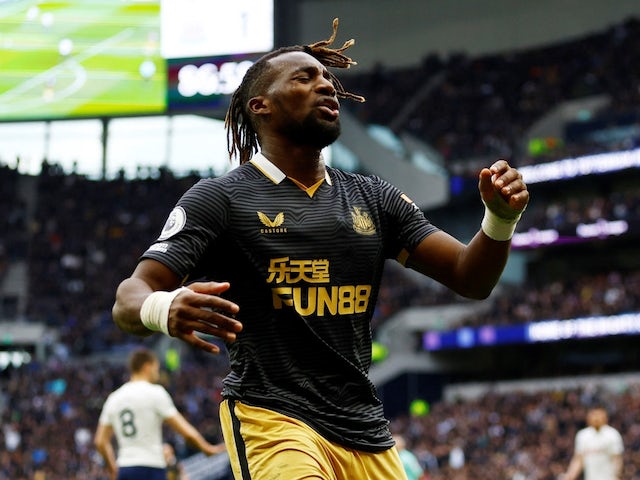 Newcastle United are ready to cut ties with Chelsea-linked attacker Allan Saint-Maximin this summer, according to journalist Dean Jones.

Newcastle United would reportedly be ready to offload attacker Allan Saint-Maximin in the summer transfer window amid interest from Chelsea.

The Frenchman shone with his explosive displays down the left-hand side for the Magpies last term, producing five goals and five assists in 35 Premier League matches.

The Magpies agreed to a £16.2m deal to bring Saint-Maximin to the club from Nice in 2019, and the 25-year-old has now totalled 12 goals and 16 assists in 93 games for the club in all tournaments.

Saint-Maximin still has four years left to run on his contract at St James’ Park and was initially expected to be a fundamental part of the club’s future plans under their new ownership.

However, journalist Dean Jones has claimed that Newcastle no longer view the attacker as indispensable and would be prepared to part ways with him amid links with Thomas Tuchel‘s side.

“Saint-Maximin, Newcastle would drive him there, to be honest. I mean, they are looking for a buyer for Saint-Maximin, and if it was Chelsea, their eyes would light up and they would be very keen to get every penny they possibly could out of him,” Jones told GIVEMESPORT.

“I know Tottenham [Hotspur] have been linked to Saint-Maximin, too. Newcastle don’t see him as part of their future project.”

A separate report from The Athletic states that Chelsea and Spurs have both touched base over a possible move for Saint-Maximin, but the Magpies slapped a £40m price tag on the attacker’s head.

As a result, the two London clubs cooled their interest in the former France Under-21 international, who has been sent a stark warning from Newcastle over his demands for a new contract, being told to demonstrate why he should be rewarded with improved terms.

Saint-Maximin has also allegedly irked the powers-that-be by disregarding rules around the training ground, but he has nevertheless been attracting interest from across Europe.

Newcastle are yet to sign a new attacking player in the summer transfer window, with Bayer Leverkusen making it clear that Moussa Diaby is not for sale.

Hugo Ekitike has also signed for Paris Saint-Germain on a season-long loan from Reims, and Eddie Howe‘s side are therefore said to have turned their attention to Chelsea outcast Timo Werner.

At this stage, there is nothing to suggest that Werner and Saint-Maximin could be used as part of a swap deal between the two clubs, and Chelsea have already signed Raheem Sterling to increase their firepower in the final third.

Tuchel’s side are therefore expected to prioritise defensive incomings, but the Blues have been dealt numerous blows in their search for Antonio Rudiger and Andreas Christensen replacements.

Presnel Kimpembe has allegedly decided that he wants to stay at Paris Saint-Germain, while Barcelona are now believed to have reached an agreement to sign Sevilla’s Jules Kounde.