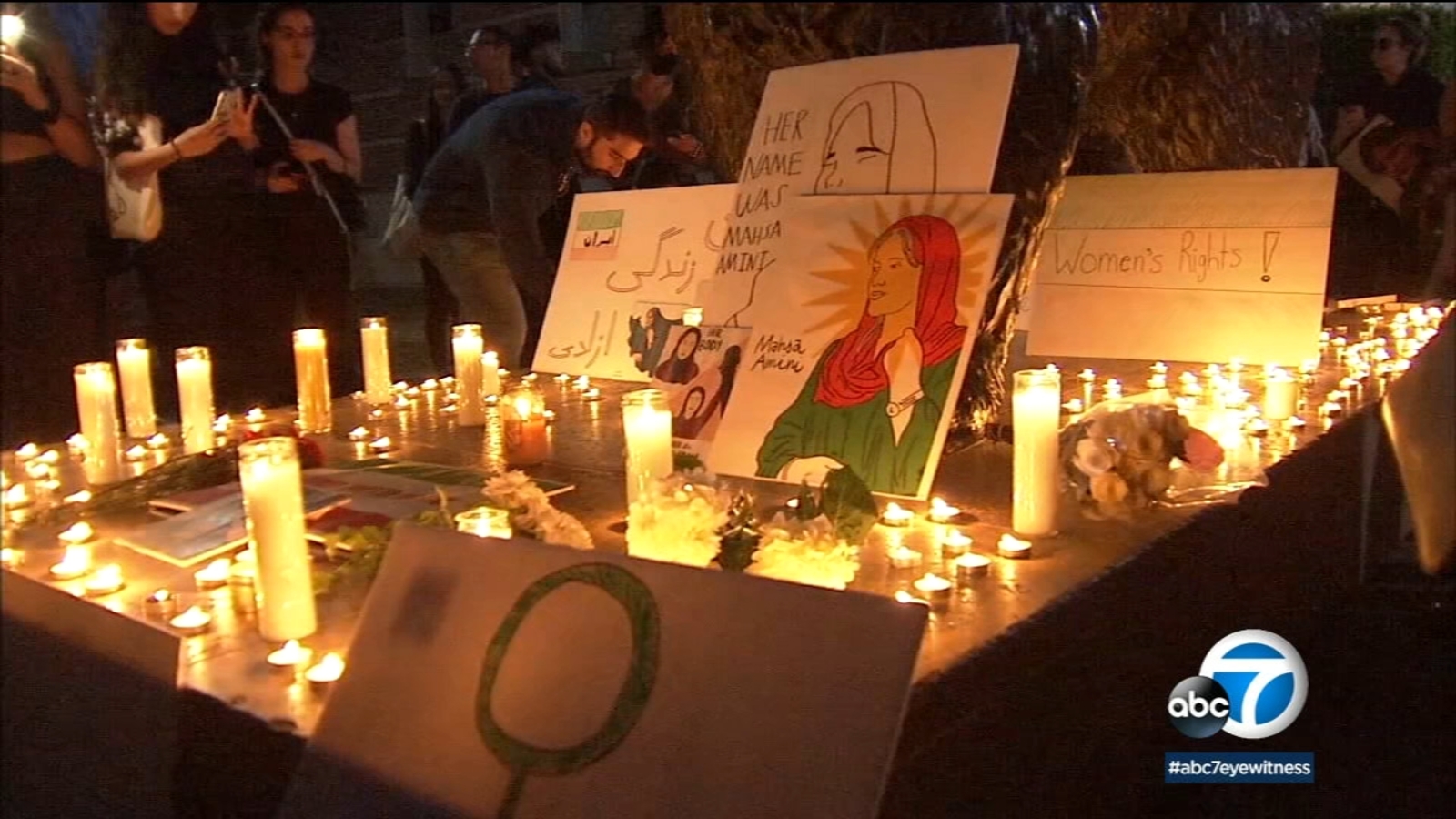 WESTWOOD, LOS ANGELES (KABC) — An emotional vigil was held at UCLA in honor of Mahsa Amini, a 22-year-old woman who died in Iran after being detained over an accusation she violated the country’s dress code by wearing her Islamic headgear too loosely.

Amini’s death has sparked outrage and protests in Iran and in the U.S., where many Iranian-Americans have expressed concern about the safety of family and friends in Iran.

Viral videos show crowds of demonstrators in the streets of the Middle East nation, overturning police cars and setting vehicles on fire. In other clips, women are seen burning their hijabs. Several people have been killed in the demonstrations.

On the UCLA campus in Westwood, dozens of candles have been placed near photos of Amini at the makeshift memorial dedicated to her. Iranian-American students held a vigil Thursday evening in a show of support.

“Women, right now in Iran, are risking their lives,” said one participant. “But it’s an emotional message, seeing how women are taking off their hijabs as a symbol to show: it’s not religious, it’s power, it’s oppression, it’s control.”

The morality police detained Amini last week, saying she didn’t properly cover her hair with the Islamic headscarf, known as the hijab, which is mandatory for Iranian women. Amini collapsed at a police station and died three days later.

Police say that she died of a heart attack and deny that she was mistreated. The government released video footage purporting to show the moment she collapsed. Her family says she had no history of heart trouble, and her death in police custody has triggered daring displays of defiance from protesters, in the face of beatings and possible arrest.

Amini’s death has prompted Iranians to take to the streets of Tehran and other parts of the country. Many Iranians, particularly the young, have come to see her death as part of the Islamic Republic’s heavy-handed policing of dissent and the morality police’s increasingly violent treatment of young women.

“A woman has a right to her own body,” said Paria Honardoust of the Iranian Student Group at UCLA. “She should have the right to choose whether or not she wants to dress herself in a certain way.”

Iranian-Americans say internet access has been shut down in their homeland. Many worry about the safety of family member.

“They are killing people in the streets of Tehran,” said a woman at the UCLA vigil who declined to be identified by name. “And they are all young kids — a 12-year-old was shot yesterday in the middle of the street. Please, help us.”

In response to Amini’s death, the U.S. government on Thursday imposed sanctions on Iran’s morality police and leaders of other government agencies.

The sanctions come after at least nine protesters have been killed in clashes with Iranian security forces since violence erupted over the weekend.