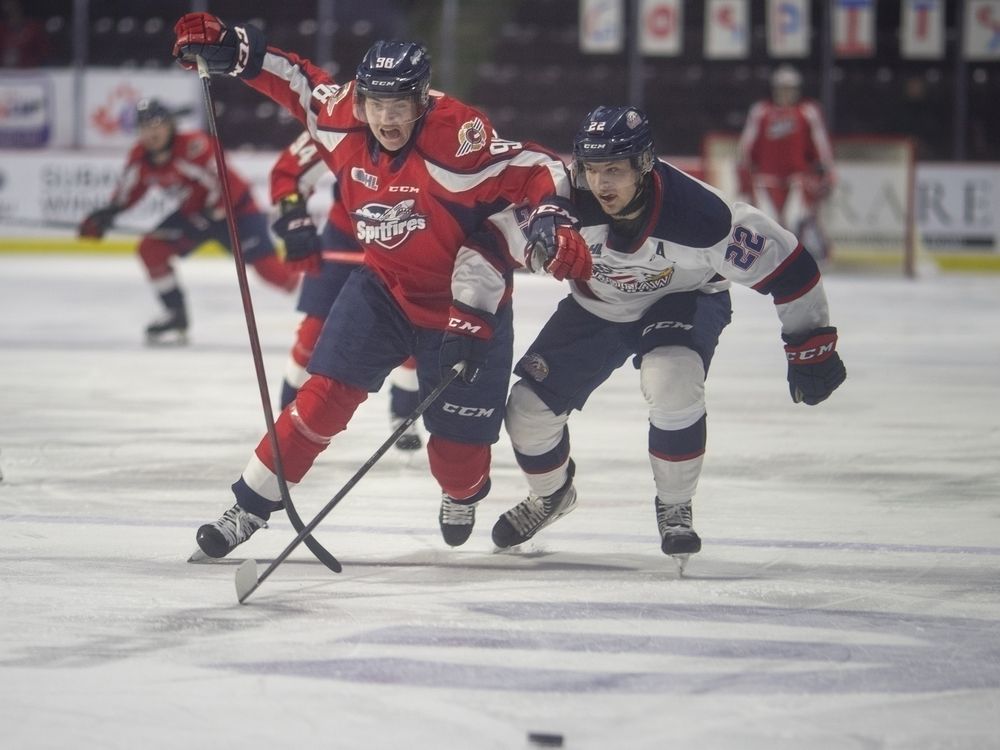 The big unit was back together and with it the Windsor Spitfires landed back in the win column.

Spitfires’ head coach Marc Savard reunited his big line of Wyatt Johnston, Will Cuylle and Matthew Maggio on Thursday against the Saginaw Spirit at the WFCU Centre.

“I think we were all pumped to play together again,” Maggio said. “You could just see it out there. We were having so much fun with each other.

“They’re both so easy to play with that you’ve just got to get them the puck and get to the right spots and you know they’re going to hit you back again.”

The 19-year-old Maggio was the man in the right spot on Thursday. He recorded his second hat-trick of the season leading the Spitfires to a 4-1 win over the Spirit as Windsor snapped a two-game losing streak.

“We looked at the lineups and the matchups and we thought that it made sense (Thursday) to put them together,” Savard said. “I thought they could have had seven or eight points. I think as a line they outshot Saginaw. They were fantastic.”

Officially, the trio combined for 20 shots compared to 19 for the Spirit, but it was the defensive effort the Spitfires were far more pleased about.

“I think we were pretty, overall, happy,” Maggio said. “We worked on our d-zone all week doing different drills. We knew that we had to tighten up our d-zone. It wasn’t good enough last week and that’s a big reason we lost both games.”

Saginaw didn’t hit double digits in shots in any period with the Spitfires dominating with a 36-19 edge overall that earned Saginaw goalie Andrew Oke’s the game’s second star in a losing effort.

“Oke’s a good goalie and we knew we had to get pucks to the net and traffic,” Maggio said. “Obviously, all week, we were kind of in boot camp. Some hard practices, we knew we weren’t good enough. Especially at this point in the season, we need every point we can get and it started (Thursday).”

Maggio had the Spitfires on the board just 57 seconds into the game when he whipped a shot over Oke’s glove.

A favourable bounce off the end boards enabled Matyas Sapovaliv to get Saginaw even, but Maggio’s 20th of the season, on a two-man power play, put Windsor in the lead for good at 2-1 after 20 minutes.

Windsor had several chances to extend the lead early in the second period, but could not beat Oke and the Spirit ended up with a couple of breakaway chances that Spitfire goalie Xavier Medina turned aside to keep his team in front.

“You’re not going to be perfect all night,” Savard said. “We had some breakdowns, a little bit, but X (Medina) bailed us out. I thought he had a good night. He was sharp when he needed to be.”

Back from injury, Alex Christopoulos broke up a Saginaw rush in the Windsor end, took it the other way and whipped a shot past Oke to give Windsor a 3-1 lead after 40 minutes.

An unselfish feed from Josh Currie allowed Maggio to complete his hat-trick with a one-hop shot into an empty Saginaw net.

“Defensively, we were a lot better,” Savard said. “There’s still room for some improvement on some things, but I thought, as a whole, we had a good effort from everybody.”

The Spitfires are off until Saturday when the club hosts the London Knights at the WFCU Centre. Game time is 7:05 p.m.