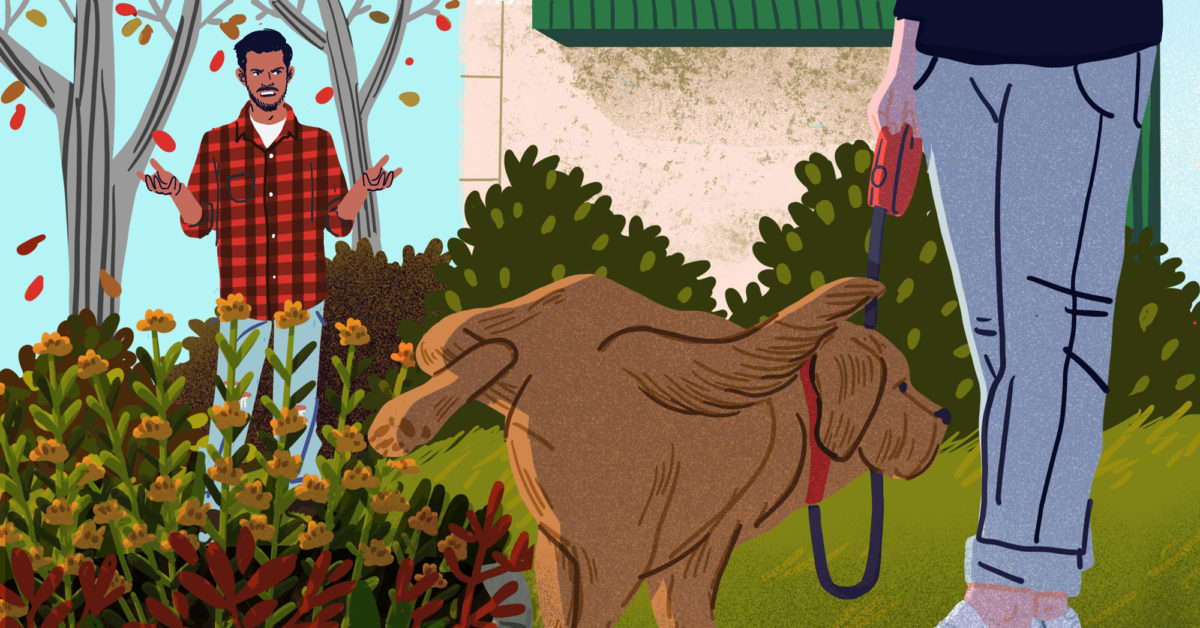 Dear Urban Diplomat,
I was walking my new beagle, Jackie, when he decided to relieve himself in a nearby condo’s garden. As Jackie was mid-stream, a man leaving the building freaked, explaining that residents spend thousands on landscaping only to have it spoiled by neighbourhood pooches. I apologized, but the man kept haranguing me. (Lots of dogs pee on my lawn, and I don’t care.) What should I do if I bump into him again?
—Pissed Off, Summerhill

There’s no bylaw against letting dogs relieve themselves in privately owned, publicly accessible spaces like condo gardens. In short: the man overreacted. Still, I’d avoid that particular patch on your daily walks, because who needs the headache? If he comes at you again, suggest that his condo board spend a few hundred dollars on barriers to block four-legged trespassers.

Dear Urban Diplomat,
I’m a 70-year-old retiree. For the first time in years, I’m having my entire family over for Thanksgiving. There will be about 20 of us—three generations, including my middle-aged kids and their teenagers. When I mentioned via email that I hope everyone gets boosted beforehand, my adult children refused the request. Now my grandchildren and I (an unlikely alliance, I know) are trying to convince them to smarten up. I’ve missed my family so much these past years, but such behaviour seems unsafe and disrespectful. Any advice?
—Worth a Shot, Don Mills

Your predicament isn’t surprising. Middle-agers are more resistant to vaccine uptake than other demographics. Don’t cancel the gathering; you deserve to reunite with your loved ones. But, at this point, I doubt you’ll convince the adults to get boosted, so compromise by requesting that all family members produce a negative rapid test upon arrival. If the parents don’t go for that, then just have a mini Thanksgiving with your grandkids. Your time with them is precious—and they’ll probably be more fun to hang out with anyway.

Dear Urban Diplomat,
My friend posted a funny TikTok video, racked up 50,000 followers and is now suddenly an influencer, making good money shilling products for brands. Here’s the thing: fame has totally gone to her head. She blew off my 30th birthday to make a video on how she needs to jettison the “boring” people holding her back in life. She’s losing friends but doesn’t seem to care as long as her view counts rise and dollars hit the bank. Can we save her?
—Under the Influence, King West

Make a big text group—with your friend and her other besties—and write a concerned message about how her recent behaviour is hurtful. If you’re lucky, she’ll apologize and try to re­integrate. More likely, she’ll get defensive or ignore the plea entirely. In that case, consider saying sayonara. If her fame fades, she may come crawling back. If it grows, so will her ego. And that’s not something any follower can get behind.

Dear Urban Diplomat,
My roommate was recently laid off from Shopify. His job was his identity for the past five years—he wore branded merch and signed up for entrepreneurial workshops, all with the hope of someday reaching the C-suite. Since he got the pink slip, he hasn’t come out to parties or applied to new jobs. I’m worried he’s depressed. How should I proceed?
—Man Crushed, Stockyards District

Were you on LinkedIn after the layoffs? Dismissed “Shopifolk” were sharing effusive tributes and displaying a near-religious devotion to their CEO, Tobias Lütke. (Imagine writing a thank-you note to the ex who just ripped your heart out.) So getting your roomie out of this rut will require a bit of innovation. If your friend won’t go to parties, bring the party to him by hosting a “funemployed” celebration and inviting all of his friends and fired colleagues. It will give him a chance to let loose, reconnect and, hey, maybe even do a bit of networking.

Send your questions to the Urban Diplomat at urbandiplomat@torontolife.com