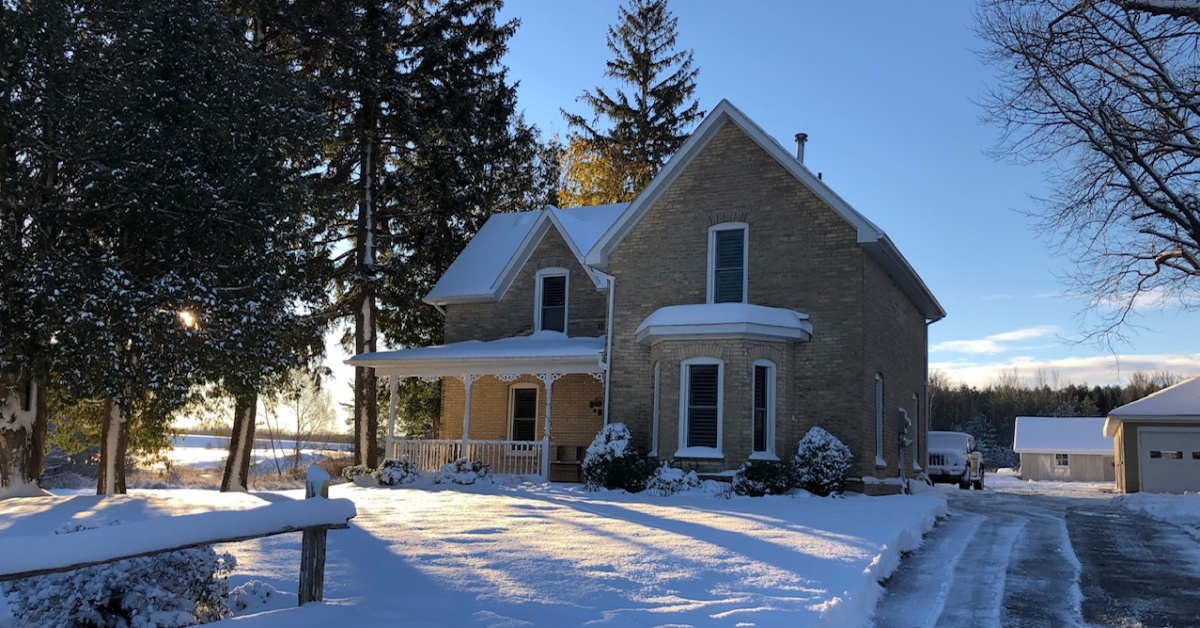 A Toronto family wanted to start a farm. When the pandemic hit, they bought an $815,000 lavender farm in Wiarton

Who: Mass Arezzi, 53, a sales manager for a finance and insurance company; Christine Arezzi, 45, an education director at a non-profit organization; and their eight-year-old son, Noah.

The history: Christine and Mass met in 2010 on eHarmony. At the time, Christine, who grew up on a farm in Elora, was living in a one-bedroom in Mississauga, paying about $1,200 a month.

Mass, who was born in France and immigrated to Canada in 1992, was renting a one-bedroom near Yonge and St. Clair. A year later, Christine moved in with Mass. They got married in 2012. In 2013, their son, Noah, was born.

By 2015, as Noah entered toddlerhood, their apartment was feeling cramped, so they bought a three-bed, two-bath detached at Victoria Park and Danforth, for $510,000. They spent $5,000 removing old carpeting, refinishing the original hardwood floors and putting new appliances in the kitchen.

A year later, when Christine’s parents were selling their farm in Elora, the Arezzis considered buying it. Rural life wouldn’t be feasible with their downtown jobs, but Christine and Mass both loved the idea of living on the farm and starting a business on the land.

When Covid hit, Mass and Christine switched to working from home—Mass in the basement and Christine in the living room. Noah, by then in first grade, was in virtual school, and Christine and Mass took turns helping him with online learning.

Now that they weren’t tied to the city, and Noah was still young enough to transition to a new school smoothly, the Arezzis thought it was the perfect time to realize their dream. Christine and Mass could both continue working remotely, and they could spend their free time building a hobby farm—and still visit friends in the city whenever they felt like it.

The hunt: In July 2020, Christine and Mass found a real estate agent and started viewing farm properties on MLS. They wanted a home that was move-in ready and had at least 10 acres of land.

Based on recent sales, the Arezzis figured they could get around $900,000 for their Victoria Park home. That would put their farm budget at about $1,000,000, leaving them additional funds to start the farm.

Two months later, Mass and Christine viewed a lavender farm in Prince Edward County. It was out of their budget, but it gave them the idea of growing lavender on their future farm.

Mass had fond childhood memories of driving through the lavender fields of Provence on family road trips. And the couple saw the potential to sell products like essential oils, along with being a tourism attraction for photos and events.

In December of 2020, they viewed a property in Wiarton, three hours’ drive northwest of Toronto. It was listed for $850,000. The house was a four-bed, two-bath Victorian farmhouse built in 1890.

The home hadn’t been renovated in a few decades, but the Arezzis loved the old interior woodwork, like the wainscoting, hardwood floors and trim around the windows and doorways. The sellers were a retired couple who had taken good care of the home.

The farm sat on eight acres of land, which they learned had sandy soil, which would be conducive to growing lavender, although nothing was growing there at the moment. There was also a 7,800-square-foot workshop, a garage and a coop with twelve hens and a rooster.

The property was a few minutes’ walk from grocery stores, cafés and restaurants in downtown Wiarton. There was also a school a few minutes away that Noah could attend. And they were just a 15-minute walk to Georgian Bay.

Mass and Christine were excited about the property. But it had less acreage than they wanted, and it used municipal water, which would make irrigation costly compared to having a well. They also needed to see if they would be allowed to plant lavender on the land.

So they took the next few months to apply for zoning permissions and explore irrigation options. The property had already been on the market for three months, so they figured they had some time to make their decision.

By February of 2021, Christine and Mass had received zoning permission to plant lavender. They also found out that they could have water delivered into a holding tank, which would make irrigation more affordable.

The couple also saw that farm properties were selling quickly, since interest in rural homes had increased during the pandemic. So they prepared an offer of $815,000, slightly below asking, factoring in the time it had been on the market.

Their offer would be conditional on selling their Toronto home. Christine and Mass put the closing date at the end of June so that Noah could finish out his school year in Toronto. Meanwhile, they prepared their Toronto home to go on the market.

After submitting their offer, the sellers countered with a closing date of May 26. Mass and Christine accepted (with the chickens included in the sale). The next day, they listed their Victoria Park home for $875,000. It sold a day later for $996,000.

The earlier closing date worked out for Noah, since he was back to virtual learning in June, so he didn’t have to switch schools.

On June 28, roughly a month after moving in, Mass and Christine planted 1,200 lavender plants.

They’ll plant another 750 in the spring, and will open for business shortly afterwards. To start, the property will be a venue for family and wedding photography, and they’ll host events like yoga classes in the fields.

Then, as their business grows, they’ll purchase distilling equipment to make essential oils, and sell products at the farm and online.

In the meantime, the Arezzis have been enjoying life. Noah has made friends at his new school and he loves playing with the chickens.

Both Mass and Christine are still on their remote work schedules. They work from nine to five, but enjoy taking breaks to walk on their property or around the neighbourhood. Mass gets satisfaction from working on the land and feeling his muscles ache after a full day of digging and planting.

Christine loves the walkability of their new location. They’re close to the beach, where there’s a playground for Noah, and trails where they can take the family dog, Hei Hei, for walks.

The Arezzis originally thought that buying a farm would have to wait until retirement, but they’re grateful that the pandemic allowed them to move up that timeline and enjoy a quieter rural life years earlier than planned.