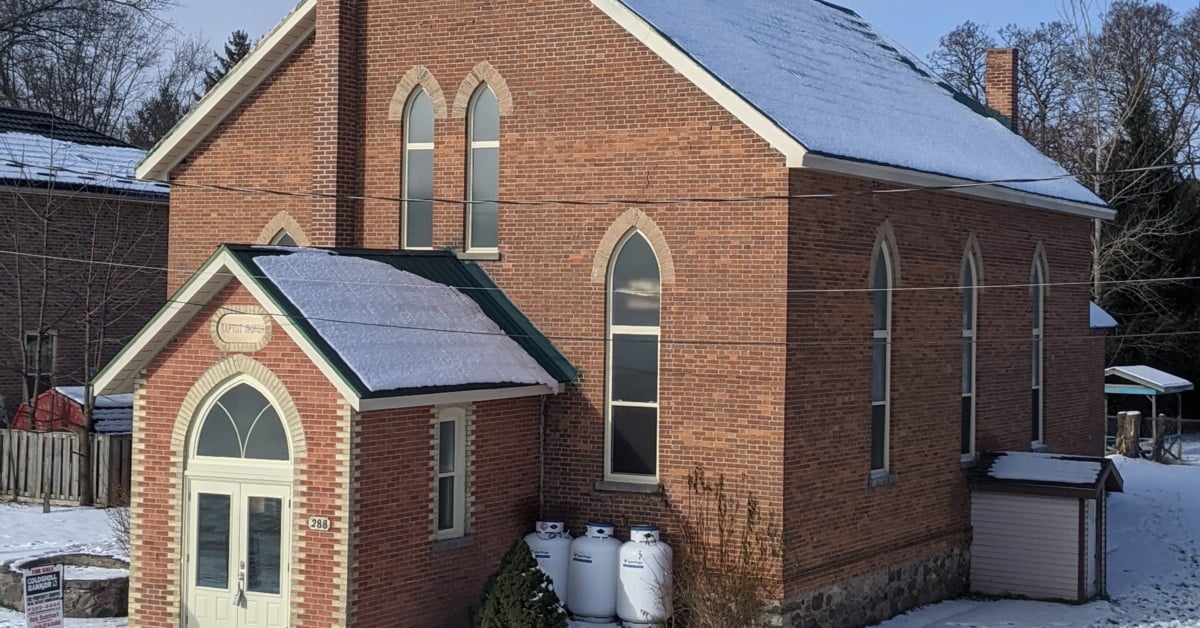 A Toronto family knew buying in the city would leave them house poor, so they bought this $208,000 church in Paisley. Now they just need to renovate

The history: Madison was born in Toronto and grew up in the Junction. When she was 18, she moved to Europe to work as a model, living between London, Paris, Milan and Denmark.

In 2016, when she was 21, she went to New York City for a three-month work contract. While she was there, she met Daniel and they began dating. Madison ended up relocating to New York City.

Daniel is from California and moved to New York City for work, also as a model. In 2017, a year after meeting, Madison and Daniel got married. They held a wedding reception at a venue in Kincardine, Ontario, where Madison’s family used to vacation.

Shortly after their wedding, the Lius bought a four-bed, two-bath house in the Catskills, in Upstate New York, paying $170,000 (U.S.). They split their time between their Catskills home and a small 200-square-foot rental apartment in the Lower East Side, in New York City.

In 2019, Madison and Daniel began thinking about starting a family. They couldn’t picture themselves doing it in the US, so they decided to relocate to Toronto, where Madison’s family still lives.

They gave up the lease on their New York City apartment and rented out their Catskills home. The Lius thought about buying a house in Toronto with a loan from Daniel’s parents, but housing prices were too high. They figured they’d rent for a few years, hoping that the market would go down.

Meanwhile, in April 2019, Daniel and Madison rented a two-bed, one-bath apartment just north of High Park, where they paid $2,500 a month.

The hunt: In March 2020, Madison gave birth to their son, Jun. That summer, the couple thought about buying a small two-bedroom house in the city. They looked at properties in Keelesdale and Little Portugal, but quickly realized that houses originally listed at their maximum budget of $800,000 were going for over a million dollars after bidding wars.

Madison always loved living in the city, but with the isolation of the pandemic, the Lius considered moving to the country so that they could purchase a house where prices were more affordable.

Plus, since the pandemic had reduced their work opportunities, they realized that spending $800,000 would leave them house-poor, and they weren’t sure if they could get a large enough mortgage since their incomes took a hit during Covid.

So they reassessed their search and budget to find a place for $300,000 or $400,000, which they could afford with a loan from Daniel’s parents. Outside of the city, they figured they could afford a larger home with at least three bedrooms. They focused their search in Kincardine, two-and-half hours northwest of Toronto, since it had a special significance for Madison’s family.

Daniel was booked for a movie shoot in Australia in the fall, so it wasn’t until early winter that they ramped up their home search.

It was built in the 1860s and was used as a Baptist church until a recent decline in parishioners forced the church to consolidate with a nearby congregation.

The church had a brick exterior and a front foyer that opened up to a 1,500-square-foot main hall that still housed rows of pews.

The rear of the church connected to an 800-square-foot addition that was built in the 1960s, where there was also a small kitchen and a powder room.

The church had been renovated over the years, so the main hall had drop ceilings and industrial carpeting. But the couple was able to peek above the drop ceiling and realized they could remove it to reveal the church’s original 35-foot plastered vault ceiling with arched windows along the side.

That got the couple excited. In the basement crawl space, they could see that the floor joists were made of massive pine logs, and that the original floors were also made of pine, which they liked.

They knew it’d be a significant renovation project, but since Daniel is a hobby woodworker, they were excited about taking it on. Since the church was priced well under their budget, they’d have some extra funds to spend on renovating the church into their dream home.

On December 21, three days after viewing the property, the Lius submitted an offer of $238,000, which was conditional on a home inspection, securing financing and getting insurance. They went above the list price since they heard there were other buyers interested in the property. The sellers accepted their offer.

But when an inspection revealed significant damage to the addition’s foundation that caused the floor to slope, requiring it to be torn down and rebuilt, they reduced their offer to $208,000, which the sellers accepted.

The outcome: Daniel and Madison were supposed to close on the purchase in early February 2021, but the deal was delayed multiple times due to complications with transferring the deed.

In March, they were told they could move in by the end of May, so they gave notice on their Junction rental. But by then, the closing had still not been finalized. So they moved into a trailer in Kincardine that Madison’s parents bought as a vacation home in 2019. They finally moved into the church in July.

The Lius have set up their bed in the main hall, on the floor of the church’s front stage. Jun sleeps in the addition, where they can block more light and sound, but it does mean tip-toeing through the room to access the kitchen and bathroom during naps.

They bathe Jun in the kitchen sink while Madison and Liu have fashioned a makeshift shower in what they believe to be an old baptism tub lined with tin. They run a hose from the kitchen sink as their water source for showering.

The kitchen’s old stovetop and oven still work, but they ordered a new fridge since there wasn’t one there when they moved in. Storage space is limited, but they’re supplementing with plastic totes on the floor for their pantry items.

The kitchen is one of Jun’s favourite spots, as he loves to stand on a stool and eat off of the cutting board as Daniel and Madison are preparing meals.

Madison and Daniel spent the first few months planning for the renovation. Daniel’s old roommate, Maria Chen, is an architect who is now based in New Zealand, so they enlisted her help to design the new space. One of Maria’s old schoolmates, Sacha Milojevic, now works as an architect in Toronto, so he’s been able to help with tasks on-site.

They plan to remove the drop ceiling and keep the kitchen and living area open to the original 35-foot ceiling, then they’ll build two bedrooms in the back with a second-floor mezzanine loft that would be used as an office and a guest bedroom.

They hope to spend around $200,000 on the renovations, and plan to save money by doing the flooring, trim, tiling and cabinetry themselves.

Meanwhile, they’re saving up to rebuild the addition in a few years. They envision creating a three-storey structure with three bedrooms that connects to the mezzanine level of the main church, where Madison’s family could stay when they visit. They’ll make space for Daniel’s future woodworking shop on the main floor of the new addition.

When Daniel and Madison have modelling work in the city, they’ll drive in for the day, or book a hotel room if they need to stay overnight. They’re going in about once a week, sometimes as a family when they’re doing shoots together.

The couple also runs a matcha company called Matcha Dive, so they use their drives into the city to make plans for the business.

In Paisley, Jun has been enjoying having more space to play in the church and outside. As he gets older, they might consider returning to the city so that he can take advantage of better schools and recreational programs, which Madison enjoyed when she was growing up.

Meanwhile, the Lius have enjoyed exploring their new town. The church is 150 feet from a river, where Daniel loves to take the family’s dog, Rileigh, for walks every morning. They’re also just a short walk from Paisley’s main street, where there’s a grocery store, restaurants and a thrift shop that also sells local eggs and jam.

Madison and Daniel have also befriended other Toronto transplants, like James and Ranna Naipaul-Colaço, who bought and renovated a restaurant, the Paisley Common, which is a five-minute walk away.

Do you have an interesting real estate story? We’d love to hear it, especially if you moved to Toronto during the pandy: realestate@torontolife.com