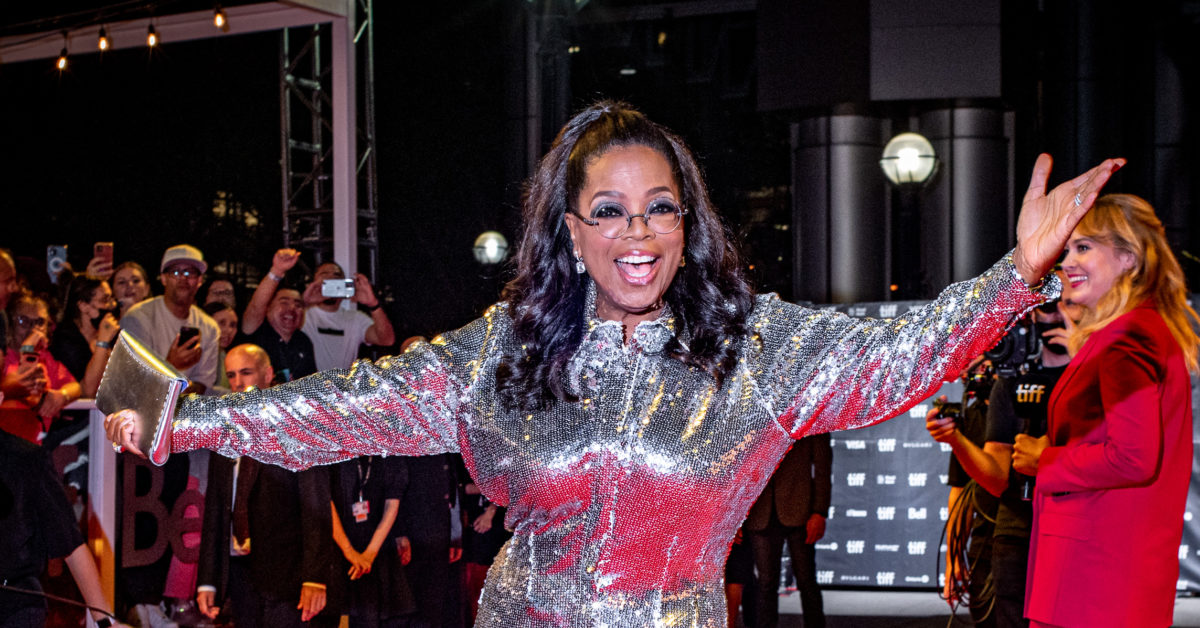 Oprah at the Sidney premiere

To mark her first public appearance since before the pandemic, Oprah tapped this season’s disco-inspired trend. In a silver Brandon Maxwell dress with a sparkling clutch and earrings, she made a triumphant red carpet return—a true Oprah moment.

Taylor Swift at her In Conversation With… event

For many TIFF fans, Swift’s in-person appearance and exclusive screening of All Too Well: The Short Film was this year’s main event—and her ensemble emitted the requisite main-character energy. In a custom Louis Vuitton halter dress adorned with reflective gold coins, the singer was glowing on the red carpet.

Lamar Johnson at the Brother premiere

With dapper tailoring and an unconventional colour palette, Lamar Johnson brought Old Hollywood to the TIFF red carpet. Wearing a grey suit with white detailing, the actor channelled the static nostalgia of black-and-white films. Adorned with chunky gold buttons, his look stood out as a callback to vintage glam.

Viola Davis at the premiere of The Woman King

Viola Davis has described The Woman King as her “magnum opus”—and she came dressed accordingly. The actor’s two-toned gown by Canadian designer Greta Constantine was festive and vibrant, with a sleek hot-pink skirt and a top made of orange floral fabric arrangements.

Janelle Monáe brought the future to the TIFF red carpet. The star emerged in a couture frock by Iris van Herpen, a Dutch designer known for her sculptural creations. With an otherworldly allure, the sweeping avant-garde gown merged imagination and elegance.

At the same event, Kate Hudson brought co-star costuming chemistry with another innovative silhouette. Her Carolina Herrera dress stood out—stopped traffic, even—thanks to its striking red hue and towering asymmetrical floral structure. Pairing it with a bold red lipstick, the actor made a strong case for the magic of monochrome.

Jeremy Pope at the premiere of The Inspection

Thanks to the pandemic, protective dressing is nothing new. But Jeremy Pope put a fresh spin on the trend in a plunging suit layered atop a chainmail-like undershirt. His all-blue outfit, featuring a cropped top and cinched waist, stood out all the more with the glistening metallic garment peeking through.

Harry Styles at the My Policeman premiere

Subtlety is not in Harry Styles’s vocabulary (nor should it be). Offering his own take on red carpet colour coordination, the singer went all out in retro Gucci green. From a brooch-emblazoned jacket and tailored dress pants to a handbag and metallic manicure, this assemblage of leafy tones was both chaotic and cohesive.

Emma Corrin at the My Policeman premiere

Also channelling the glamour of decades gone by, Emma Corrin proved that black is still the ultimate statement-making hue in this leggy look. Donning a custom Miu Miu bodysuit with billowing sleeves and mesh tights, the actor’s ensemble was reminiscent of a 1960s Rockette uniform and worthy of a standing ovation.

Joe Jonas at the Devotion premiere

No undershirt, no problem. The eldest Jonas brother stepped out in a chest-baring velvet suit by Louis Vuitton, putting a playful twist on power dressing. The star’s shimmering nail polish matched his jacket’s diamond brooch, bringing some bling to the otherwise all-black number.