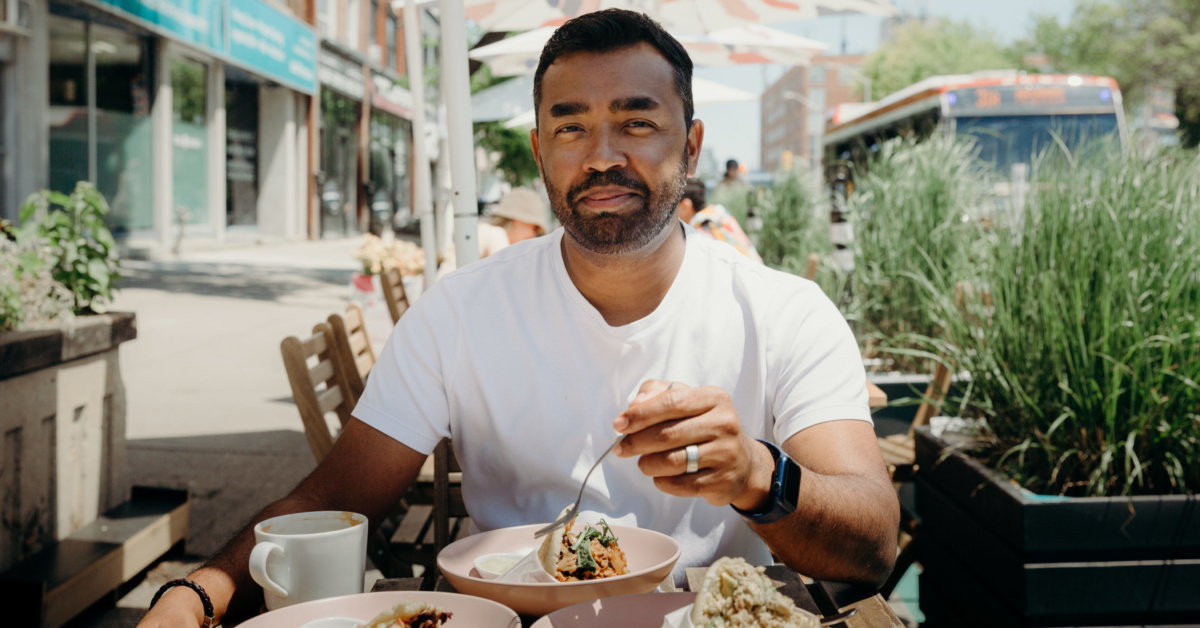 “I’m hand-picking each vendor, there will be no A-list chefs here”: A Q&A with Suresh Doss about bringing Smorgasburg to Toronto

Smorgasburg, Brooklyn’s beloved food market (famous for incubating top culinary talent), is launching its first international outpost this summer. The Canuck incarnation is set to pop up on Toronto’s waterfront for eight Saturdays, starting July 23. With other U.S. editions in New York City, Jersey City, Los Angeles, and Miami, the 11-year-old market won’t be parachuting in Americans to replicate their south-of-the-border successes. Instead, they’ve tapped local writer and food guide Suresh Doss to curate Smorgasburg. Here, we caught up with Doss to chat about how he’s planning to make this event a particularly Toronto affair.

First the Michelin announcement and now this! Everything’s coming up Toronto! How long has this been in the works? And why now?
For starters, Waterfront Toronto reached out to Smorgasburg after the whole Sidewalk Labs debacle, so that’s what kickstarted everything. It actually should have come to Toronto 10 years ago when we had our street food renaissance. Now, though, is also an interesting time for our city’s food scene. Over the pandemic, many cooks and bakers went virtual, or moved out of the city. We’re seeing a lot of displacement. But, as certain doors closed, others opened, particularly with the hundreds of pop-ups that launched on social media platforms during lockdown. These pop-ups brought a fresh perspective; cooks of all ages were introducing new cuisines, oftentimes very personal, culturally charged cooking. If Smorgasburg is a platform for up-and-coming cooks, then now is the best time because we’re able to tell the story of where the food scene will go in the city in the next decade.

We had a street food renaissance?
Yes! And I think it’s important to credit how much Hassel Aviles, who was one of the first people to offer home cooks a platform when she launched the Toronto Underground Market back in 2011. TUM was inspired by Smorgasburg, and Smorgasburg Toronto is following in the footsteps of her work. When I signed on, Hassel was the first person I called to see if we could get her involved. She declined due to her schedule. But personally, I don’t think we would be the food-obsessed city we are without her work a decade ago.

Speaking of being food obsessed, the city already has a lot of fantastic food festivals. Why does it need another one?
Generally speaking with Toronto food festivals, it’s either the same food vendors that run the festival circuit and are at every festival, or a street will be shut down and there will be lots of food options on the street but more or less the same types of vendors. It’s a lot of rinse and repeat.

So how will this be different from those other markets and festivals?
This is where I get to flip my collar because I’m hand-picking each vendor. They’re all small independent shops, mom-and-pop places or home cooks—there’ll be no A-list chefs here. I’m then curating the menus with the vendors so no two menus will have overlapping dishes, although every vendor will have at least one vegan or vegetarian option. About a quarter of the dishes will also be halal. In short, it’s inclusive to every palate, while serving foods you don’t often see downtown. So far, the vendors are 70-per-cent women-owned businesses, and 95-percent BIPOC-owned.

And how will it be different than the O.G. Smorgasburg? Can Toronto’s food scene compare with Brooklyn’s?
There’s no comparing Toronto’s food scene to New York’s when it comes to the sheer range of how regional our food is—Toronto has such an abundance of regional offerings. We mention Toronto is a diverse city and we’ve repeated that to death, but for the past few years we’ve seen even more regional foodstuffs. It’s no longer just a restaurant serving the food of Thailand, but dishes that are from a specific town south of Bangkok. For example, one of our vendors is a couple from Karachi that will be serving a version of khao suey—which is originally a breakfast noodle soup that you would find in Myanmar (Burma), but it’s interpreted through a Karachi lens with the diaspora. There’s a Filipino vendor who will be showcasing a menu of the islands. And there’ll be tamales by way of regional Guatemala, which are different from the Mexican tamales you might already be able to find in Toronto.

Restaurants have been under a lot of pressure for the last couple of years. Is participating in something like this a good deal for them?
The Smorgasburg New York team has repeatedly mentioned that this is not an event designed to make money; it’s designed to break even. Waterfront Toronto giving us this space really has helped keep vendor fees low. Whereas some festivals can ask vendors to pay thousands of dollars to participate, we’re only asking $350 of food vendors and $150 of non-food vendors.

Toronto has so much great food from so many different talented makers. How did you even begin to choose?
I’ve been doing this for a while, and my suburban food tours have fed this list. Although, I was introduced to more than half of the scheduled vendors via pandemic pop-ups. I think that’s the story of Smorgasburg Toronto for me, all this new talent and perspectives in cooking we’re being exposed to recently. The event is also an incubator and a platform for those that don’t have the capital to go straight to a bricks-and-mortar business.

How many vendors will there be?
There’ll be 50 total, every week.

What about drinks? Will this be a licensed event?
Yes. Evelyn Chick will be running a licensed area. She has a real eye for local booze, so it should be entirely Ontario wineries and Ontario breweries, with a focus on smaller craft producers. We’ve even tapped Henderson Brewing to make a lager for this event. We’re calling it the SmorgasBier, and George Brown students are designing the can.

Is George Brown participating in any other ways?
They’re not a sponsor, but I wanted George Brown to be involved because the school has a wonderful culinary program and I thought it was important to include their students in a food event like this. Their student body will also be designing the benches and they’ll be running a pop-up using a 3-D printer to make pizzelle that’s actually edible.

What’s the hardest thing about curating something like this?
It’s the fact that it’s outside. With no roof over your head, there are so many hurdles: power, tenting, it’s set-up and tear down every Saturday. Being outside also limits which vendors we can have. Someone like a patty maker needs so much electricity, or someone who does noodles from scratch needs so much water. It’s a bit of a logistical nightmare.

Okay, so it’s called Smorgasburg because the market started in Williamsburg, but that portmanteau doesn’t really work for Toronto. What would be a better name for our edition, if you could rename it?
My vote is SmorgasBorough. Toronto is not one contiguous city. We’re a city of neighbourhoods, some of which you’d never even know existed if you were bussed through the city. I guess SmorgasBorough is still a nod to New York, too, though. So maybe SmorgasDome? Definitely nothing with 6ix in it—sorry, Drake fans.