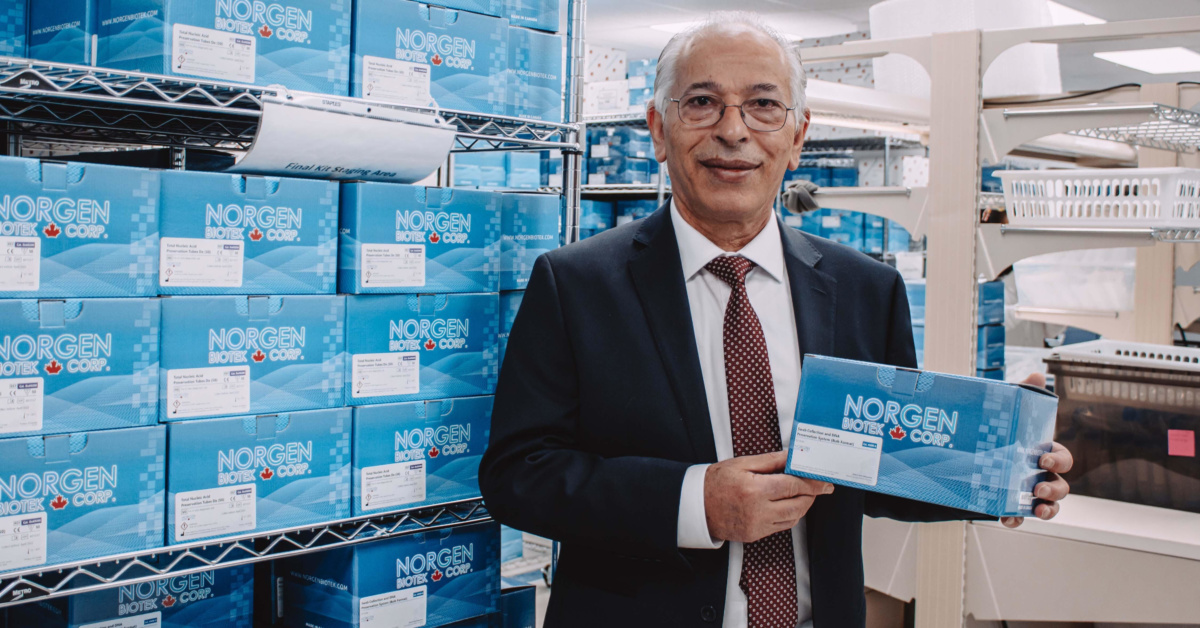 “The accuracy of PCR with the convenience of rapid”: A Q&A with a molecular biologist developing a Covid-19 super test

“We’re close. This test is months away, not years”

Molecular biologist Yousef Haj-Ahmad left his teaching position at Brock University back in 2013 to focus full-time on Norgen Biotek, a manufacturing and research company that develops tests that can be used to detect anything from chlamydia to, yes, Covid-19. The Ontario government recently invested a million dollars in the company’s current mission: the development of Covid-19 testing kits that aim to combine the accuracy of a PCR test with the convenience of a rapid antigen test. Haj-Ahmad says this new product could help us crush this pandemic as well as combat—sigh—pandemics of the future.

Your company just received $1 million in funding from the Ontario government. What are you going to do with it?
The government’s investment will go towards research and development. We are working on creating a new type of rapid PCR that would be a huge step forward in diagnostics. But it will be part of a larger $14-million expansion that will include new office and manufacturing facilities, which we will fund using profits from the last two years.

You have certainly found yourself in a very in-demand industry. How did you get into molecular diagnostic testing in the first place?
I’m a molecular biologist with a special interest in virology. Before I founded Norgen Biotek, I was a professor at Brock University for almost 30 years. During that time, I would often take on paid projects—a colleague would ask me to isolate DNA from a cytoplasm or something like that. I kept taking on more and more work, and at a certain point I decided that it made sense to have a lab that was independent from the university. At the same time, I was looking around at changes going on in the world: the human population is expanding, we are building out into areas that humans didn’t use to live in, which means more exposure to animals, and we are traveling widely. All of this means we will be dealing with pathogen outbreaks on a regular basis. In that sense, diagnostics was low hanging fruit, but try telling that to prospective investors. I was unable to get venture capital—instead I had to borrow against my house. If you say you’re going to cure breast cancer, people will line up to write a cheque; but RNA isolation, DNA isolation—the investment community just didn’t think that was a big deal.

Well, you showed them.
It’s true, a lot of what we do has become very relevant during the pandemic. Being a molecular biologist, I had a good idea pretty early on that Covid-19 was going to wreak havoc worldwide. We started scaling up our production facilities in February 2020 to manufacture Covid-19 test kits. The virus was new, but the technology involved in PCR testing is the same whether you’re testing for chlamydia or Covid, so it wasn’t a big deal in that regard. And definitely there was demand. We had a big market in the U.S., but also South America, Europe, Asia. Our manufacturing went from 10 units a month to close to a thousand.

A 100-fold increase! How did you keep up?
We hired 150 new people and ran two shifts so production could continue around the clock. The real challenge was space. Suddenly we’re ordering 250,000 clamshells to store saliva, chemicals by the ton, swabs by the million. At one point, we brought in a 40-foot storage container. And then a second one and a third one, and pretty soon we had 10 of these large units on the property. My employees had nowhere to park their cars! So yes, the pandemic was big for us, and that’s just the manufacturing side. At the same time as we have been producing the traditional PCR testing kits, our research and development department has been focused on creating what I mentioned before: DNA-based testing kit that is simple enough for point of care use—in hospitals, schools, offices and walk-in clinics—and ultimately at-home use. That’s where we’re focused in terms of innovation.

How is what you’re describing different from the testing options that are currently available?
PCR testing identifies trace amounts of Covid-19 in your DNA. The way it works is almost like a photocopier that amplifies the genetic material so that there is enough to analyze. It is very reliable in terms of an accurate result, but the drawback is that these tests currently require a trained professional to administer and a lab environment to get results. Rapid Antigen Tests, on the other hand, are very simple to use—like taking a home pregnancy test—but they’re not very sensitive, which means you may not get an accurate result.

The Ontario government recently started distributing 5.5 million rapid tests a week. Is that a good thing or a bad thing?
It’s the best option we have. Nobody wants to wait 24 hours—or longer—for a PCR test result. If you’re having friends over or going to a restaurant, you want a result in an hour. It’s funny though, because before the pandemic, antigen testing was considered old technology—it was the past and PCR was the future. Sort of like a typewriter compared to a computer. Most of the companies that used to create antigen tests stopped doing that because it wasn’t seen as a growth area. But then Covid-19 happened and in this context antigen tests have suddenly become very valuable again because of their convenience.

So your test would have the accuracy of PCR with the convenience of the RAT?
Exactly! Our objective is to democratize PCR testing so that everybody can access it and not have to stand in line at a hospital or pharmacy. We’re not there yet, but we’re getting closer.

How would these tests work? Keeping in mind that you are speaking to someone who failed Grade 10 science.
It’s saliva-based; no swab needed. You spit in a device that we’re developing and close it, and a preservative is automatically released into the specimen that isolates the RNA—that’s the part of the DNA that needs to be examined. Twenty minutes later, if the specimen turns red, you’re positive; if it’s yellow, you’re negative. Easy and fast. We’ll need to wait on regulatory approval, but I would say it’s months away, not years.

What steps are left before it’s ready?
We are working on simplicity, precision, accuracy—so making the specimen pure in a short time. We can do that in the lab, but most people don’t have centrifuges and incubators in their homes. In the computer world, they have the expression “garbage in, garbage out”—meaning your result is only as good as your inputs—and this phrase applies to diagnostics, too. If you have a lousy specimen, there is zero value to the test.

Can you share a recent scientific breakthrough?
I don’t want to get into specifics because there are a lot of competitors out there, both in Canada and across the globe.

So it’s a race then?
No question. Whatever information I have, the Chinese also have it, the Indians, the Brazilians. Business is not competing with the company across the street. This is billion-dollar technology and we’re in a global competition. We currently have 26 patents issued and 10 more pending, but if people in different countries don’t respect your patent, what are you going to do? Go and sue them in Russia?

What difference could rapid PCR testing make in terms of the general public’s ability to fight Covid?
This could make such a huge difference to containing the virus. Think about schools or workplaces. We have been using regular PCR testing with our staff because we have the facility, and we have not had a single outbreak. When a positive result is detected, the person is sent home. Imagine the implications for traveling if you could just spit in a tube at the airport and get on the plane?

So you’re saying a rapid test before travel is not sufficient?
Well, it’s better than nothing. But if you could have greater accuracy it would make such a difference. Everyone talks about how we need to get back to normal, and I think that accurate detection is the best weapon we have. If you know the history of biology you know that every eight years or so there’s a new disease that could or could not lead to an outbreak. If you can see the wolf, you can avoid the wolf.

There has been a lot of conversation around how Canada needs to beef up domestic test production to avoid being reliant on other countries. Presumably you agree?
Yes, absolutely. We have so such a strong scientific talent pool—there is no reason why we shouldn’t be more self-reliant. What we need is a commitment from the government to ensure manufacturers are in the position to scale up when necessary.

When you say commitment, you mean money.
Yes. For business owners it isn’t feasible to maintain capacity far beyond what the market demands at the time. The government needs to say, “Okay, you scale up, and we will support you even if we don’t need the product now.” Because if you wait for the crisis, it’s too late. It’s sort of like investing in a bunker. You hope you don’t need it, but if you wait until you do, it’s too late.

And speaking of money. You recently made a $5-million dollar donation to the Brock Engineering department. I guess you have done pretty well in all this?

Yes, we have done well, but I’m not doing this to get rich. I’m excited to be able to support innovation at Brock where I spent so many years, but what else am I going to do? You eat three meals a day, you have clothes to wear. What else are you going to do? And I bought a new car. I haven’t had a car in a long time and my wife has always driven me to work. I miss our time together in the morning though, so I might give the car to her.

This interview has been edited for length and clarity