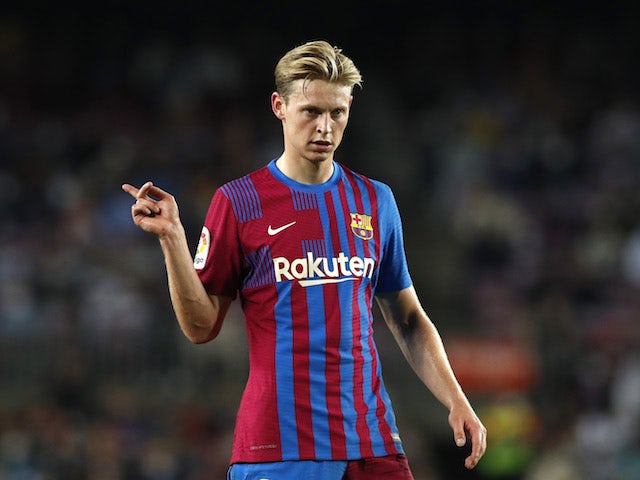 Frenkie de Jong is at the heart of arguably the biggest transfer saga of the summer transfer window, with the midfielder’s future still unclear despite weeks and weeks of speculation.

Manchester United are pushing to sign the Netherlands international, but it is believed that he is desperate to remain with Barcelona despite their apparent desire to sell him.

Chelsea have also been credited with an interest in the 25-year-old, with a recent report claiming that De Jong would only be prepared to leave Camp Nou to join Thomas Tuchel‘s side.

With that in mind, Sports Mole looks at three possible outcomes to the saga.

De Jong’s first choice is to remain at Barcelona this summer, with the Dutchman branding them his “dream club” when the interest from Man United first became apparent almost two months ago.

The midfielder was again a key player for the Catalan giants last season, but the La Liga outfit have allegedly told him that he needs to leave this summer for financial reasons.

Having signed Andreas Christensen, Franck Kessie, Raphinha and Robert Lewandowski this summer, Barcelona are under huge pressure to make a sale, while it is understood that De Jong is in line for a pay increase at the club, which would stretch their wage budget.

A recent report claimed that the midfielder would be prepared to accept a pay reduction at Camp Nou, but the situation is incredibly complicated, with Barcelona planning for him to leave this summer, while the club allegedly owe him as much as £14m in deferred salary payments.

De Jong has been used off the bench in Barcelona’s pre-season matches in the United States, with head coach Xavi deploying him as a defender in an apparent snub.

The Dutchman has a contract with the club until June 2026, though, and the Catalan side would not be able to move him on if he outright refuses to switch teams this summer.

Man United would be forgiven for thinking that they would have had De Jong’s signature tied up at this stage, but it has been a messy and uncomfortable transfer saga for the Red Devils.

New head coach Erik ten Hag is said to be desperate for a reunion with the player that he managed at Ajax, viewing him as the ideal midfielder to operate in a deeper role in the new season.

However, Man United’s absence from the 2022-23 Champions League is believed to be a huge issue for De Jong, while there have also been claims that he does not want to make the move to Manchester.

Having spent so many weeks attempting to sign the Dutchman, it would be a huge blow if they were unable to get the deal over the line.

The fact that the 20-time English champions remain in pursuit means that they must have been given some form of encouragement, but it is ultimately up to De Jong to decide whether he wants to move to a team that are currently going through a difficult spell in their history.

Chelsea are also believed to be realistic contenders for De Jong, and it has been claimed that the Dutchman would rather move to Stamford Bridge than make the switch to Man United.

The Blues have boosted their squad with the arrivals of Raheem Sterling and Kalidou Koulibaly this summer, while Conor Gallagher is expected to be a part of the first team next season following a successful loan spell at Crystal Palace.

N’Golo Kante and Jorginho remain important figures for the Blues, but both players have been linked with moves away from the club over the last few months.

As a result, it would certainly not be a surprise to see Chelsea spend big on a new central midfielder before the end of the transfer window, and it is not difficult to see why they would be interested in De Jong.

If Barcelona are successful in forcing the former Ajax youngster out of the club, and he outright rejects a switch to Man United, then Chelsea could secure his signature.

The Blues have not been involved in negotiations with Barcelona over the 2020-21 Copa del Rey winner, though, and the club have other priorities, namely signing another centre-back and a new centre-forward.