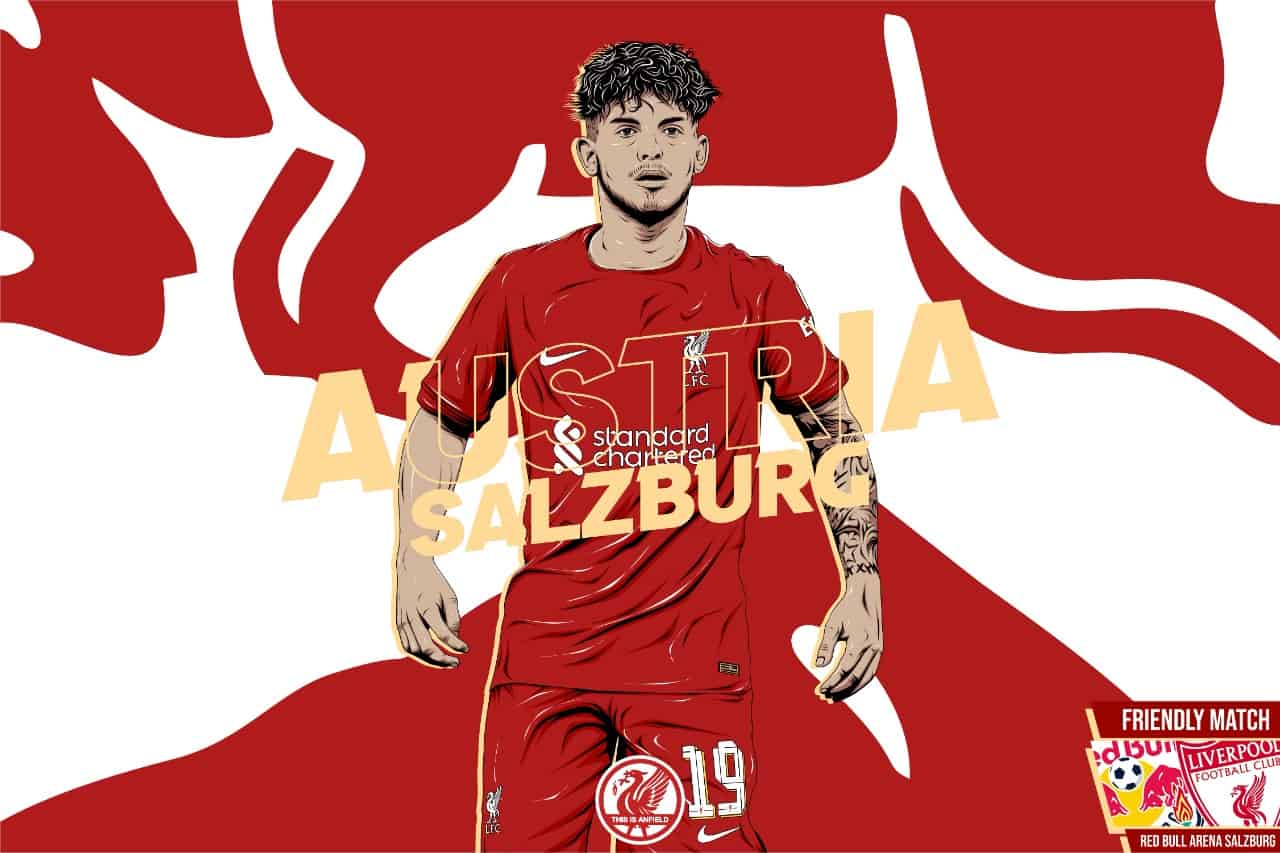 Liverpool are onto their fourth friendly of pre-season and it is set to the familiar backdrop of Salzburg, with the Austrian champions opponents on Wednesday.

After clashes with Man United and Crystal Palace in Asia, and a 5-0 victory over RB Leipzig in Germany, the Reds’ next stop is the Red Bull Arena in Austria.

Salzburg will host Liverpool in a 7pm kickoff, three days before the Community Shield in Leicester.

Here are 10 key things to know ahead of the latest pre-season friendly.

It remains to be seen who the manager is referring to, with 29 players taking part in an open training session in Saalfelden on Tuesday morning.

But there are at least six players ruled out, including Alisson, Kaide Gordon and Calvin Ramsay, who all travelled to Austria but are not yet in full training.

Diogo Jota did not make the flight last week due to injury, as was also the case for Alex Oxlade-Chamberlain and Caoimhin Kelleher.

2. But we could see a strong lineup

Nevertheless, despite the uncertainty over those involved and the confirmed absentees, there is likely to be a strong side fielded in Salzburg.

While Adrian is almost certain to start as third choice in the absence of Alisson and Kelleher, the remainder of the starting lineup could be close to Klopp’s first-choice XI.

That could include the trio of Mohamed Salah, Luis Diaz and Darwin Nunez starting together for the first time – the latter buoyed by his four-goal haul against Leipzig last time out.

“This pre-season we had to do slightly different and we wanted to do as well,” Klopp has explained.

“All of them will play the first time 90 minutes on Saturday, all of them. But that’s how we did the training.”

More likely is that many players will be given another hour on the pitch, as was the case against Leipzig, before a full 90 against Man City in the Community Shield this weekend.

Liverpool have settled in for rigorous sessions and picturesque downtime in the familiar surroundings of Saalfelden over the past week.

It has become a staple of the Reds’ pre-season, with Klopp and his staff taking advantage of the top-class facilities and quiet landscape to prepare the players for the campaign ahead.

Wednesday will not be the first time Liverpool have played Salzburg, either, with this their fourth meeting.

Back in 2020, the two sides met in a pre-season friendly at the same stadium, with the Red Bull Arena hosting a 2-2 draw that saw Rhian Brewster and Patson Daka net braces.

While this is the fourth of six warmup games for Liverpool this summer, their opponents are already up to speed with the first competitive wins of 2022/23 under their belt.

Salzburg kicked off the campaign proper with a 3-0 victory at SV Fugen in the Austrian Cup on July 15, before a 3-0 league win over Austria Wien on Friday.

6. Their production line is legendary

One of the goalscorers in that 3-0 victory over Austria Wien was Benjamin Sesko, who is primed to cement himself as the next leading striker at Salzburg following the sale of Karim Adeyemi to Borussia Dortmund.

Adeyemi was Salzburg’s latest in a long line of high-profile sales, with the likes of Erling Haaland, Dominik Szoboszlai, Dayot Upamecano, Brenden Aaronson, Hee-chan Hwang and Enock Mwepu among those to have come through the production line.

Liverpool signed Takumi Minamino from Salzburg in 2020, while Sadio Mane and Naby Keita both played for the Austrian club before their moves to Merseyside.

It is often the case that when Liverpool play clubs from Germany and Austria, there will be at least a small connection to the man in the dugout.

In this instance, Klopp will find himself up against a player he and Peter Krawietz will have studied during their time working with Mainz and Dortmund.

Matthias Jaissle featured against Klopp’s Mainz once and Dortmund twice during his time as a player with Hoffenheim, winning two and drawing one.

Persistent injury problems forced an early retirement in 2014, and at only 34 he is now in charge of his second club, having joined Salzburg from sister-club FC Liefering last year.

While there was a much-needed day off for the squad on Monday, it has been a punishing schedule on the training pitch in Austria.

9. Back to England afterwards

With the last campaign ending with the Champions League final and the next starting early due to the mid-season World Cup, it has been a condensed pre-season for Liverpool.

After a tour of Asia and the training camp in Austria, the Reds are expected to fly directly back to Merseyside from Salzburg on Wednesday night.

Klopp will then begin his pre-match media duties on Thursday ahead of the Community Shield. It’s all go!

Salzburg vs. Liverpool will be shown live on LFCTV GO from 6.30pm (BST), with kickoff set for 7pm.

As ever, This Is Anfield will be providing coverage and analysis of the pre-season friendly in our matchday live blog, with Henry Jackson keeping you entertained.